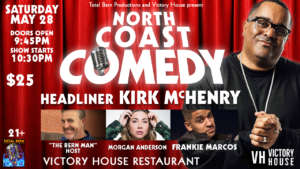 Kirk McHenry is coming all the way from Las Vegas to bring you a legendary performance. His versatility and ability to deliver gut bursting laughs to his audience, sets Kirk McHenry apart from the average comic. Born and raised in Oakland, California, Kirk has acquired a wealth of knowledge from life in the inner city, to attending a prep school in the suburbs, experiencing college life in the south, and his successful four-year stint in the Marine Corps.

Always viewing life through the eyes of a comic; Kirk blends all of his life experiences together into a story -telling brand of comedy that has been likened to Bill Cosby with a Richard Pryor twist captivating audiences across globe; having already opened for comedic stars including Paul Mooney, Bobby Slayton, Gary Owen, Charlie Murphy, Tommy Davidson and the Eddie Griffin. Kirk has also opened up for several musical acts such as The Whispers, Howard Hewitt, and KEM.

Kirk McHenry is ranked as one of the Top 10 Comics in the Bay Area, according to Karma 777 Film Works and Productions, and “Best of New Faces” at Jamie Foxx’s Laffapalooza in 2005.

Kirk is a comic that will definitely give you a workout through laughter. Drawing inspiration from everyday life his storytelling form of comedy is better than reality TV. Kirk has had television appearances on Comic View as well as numerous touring stops in comedy clubs throughout the United States and abroad.

Frankie Marcos started his stand up comedy career in San Jose, California. Now based in Los Angeles, he’s working at Comedy Clubs across the US, as well as Canada, and is scheduled to tour Australia in January of 2023. Frankie has worked with Taylor Tomlinson, Michael Che, Nicole Byer, Bobby Lee, and more. In 2017 he was the runner up for the annual Rooster T Feathers Comedy Competition out of 100 Bay Area comedians. In 2019, he placed 6th overall in the SF International comedy competition out of 32 comedians worldwide. Frankie will be in “Sincerely the Bay” documentary alongside Tom Brady, Marshawn Lynch, Saweetie, and other Bay Area stars. Frankie has had multiple viral videos on his Instagram and TikTok, both can be found under FrankieMcomedy.

Morgan Anderson is a fiery, up and coming comedian out of Sacramento. Her dark comedy is highlighted by a dry wit and biting sarcasm. She’s performed in clubs and bars all over the US. When she’s not on stage discussing her pubes and childhood trauma, you can find her at home, sitting on her bed in a towel, trying to figure out which workout leggings to wear.