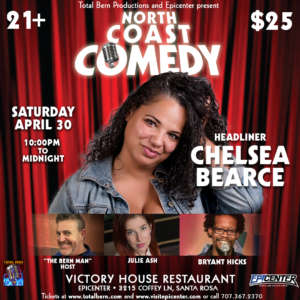 Chelsea Bearce got her comedy start in Los Angeles and quickly headed to New York where she performed at over a dozen comedy clubs regularly including Gotham Comedy Club, New York Comedy Club, Broadway Comedy Club, The Stand, where she performed alongside Janeane Garofalo and Caroline’s, where she performed alongside Darrell Hammond. Chelsea is a regular at Cobb’s and The Punch Line. She also studied at Upright Citizens Brigade in both their sketch program and improv program. Her blend of observational comedy and self-deprecation combined with her comfortability with talking to the audience and making them comfortable enough to make fun of themselves too, makes for a very enjoyable time had by all. She is a member of Killing My Lobster in San Francisco and has performed in multiple sketch comedy shows with them in the Bay Area. Chelsea has also written multiple parodies as well, including Curvy (which went viral) and you should watch it if you like songs about boobs.

Bryant Hicks is a must see!! He has been funny since birth and loves making crowds laugh. In 2011 he burst on to the comedy scene and has been impressing crowds ever since. He performs all around the country and can’t wait to make you laugh. He is now part of the HellaFunny crew. He has opened for Dave Chappelle, Faizon Love and Ali Wong (just to name a few). He lives by his hash tag #befunny365 #HellaFunny #BeHellaFunny365